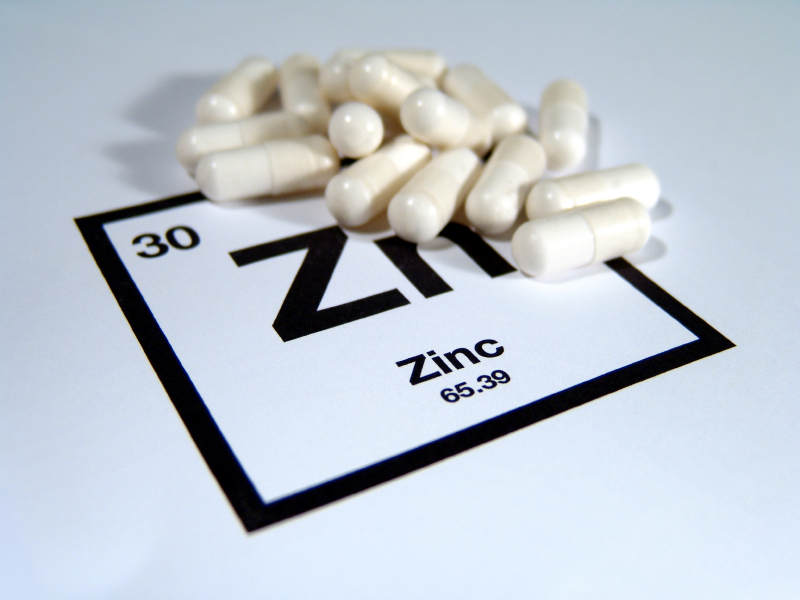 Zinc (Zn) is a metal and is called an essential trace element because zinc is necessary for human health in very small amounts. Over 300 enzymes require zinc for their activation and nearly 2000 transcription factors require zinc for gene expression [15]. Zinc, as a supplement, is available in tablet or capsule form and is used to prevent or treat zinc deficiency. It is also used for boosting the immune system, treating the common cold and recurrent ear infections, and preventing lower respiratory infections.

Severe and moderate deficiency of zinc is associated with hypogonadism in men [7]. Statistically significant positive correlation was observed between serum zinc and serum testosterone in men [14] but not women, suggesting that slight zinc deficiency act on testicular level rather than pituitary gonadotropins [8].

Zinc deficiency appears to inhibit some growth related hormones but its excessive use does not increase them above normal levels when sufficient zinc is provided by the regular diet.

It is estimated that as much as 25% of the world’s population is at risk of being zinc deficient. Nutritional deficiency of zinc may affect nearly 2 billion subjects in the developing world [15]. However, most physically active individuals consume diets that provide amounts of zinc sufficient to meet population standards. Inadequate intakes of zinc have been reported for participants in activities requiring restriction of body weight [16].

Experimental evidence indicates that acute physical activity increases loss of minerals but that these losses are lasting only for a short time [16]. No alteration in mineral status as evidenced by plasma or serum concentrations are evident in population whose dietary intake of the mineral elements is consistent with population guidelines [16].

It is believed that Zinc possesses antioxidant properties, which may slow down aging of the skin and muscles of the body. However, studies differ as to its effectiveness [1]. Zinc also helps speed up the healing process after an injury [1]. It is also beneficial to the body’s immune system and its deficiency may have effects on all parts of the human immune system [2].

Zinc Side Effects and Toxicity

Besides its needed effects, it may also cause some unwanted effects especially when taken in large doses. Side effects with large doses include: chills, continuing ulcers or sores in mouth or throat, fever, heartburn, indigestion, nausea, sore throat, unusual tiredness or weakness [17]. Symptoms of overdose include: chest pain, dizziness, fainting, shortness of breath, vomiting, yellow eyes or skin [17].

Taking 450 mg or more of zinc daily can cause problems with blood iron. Single doses of 10-30 grams of zinc can be fatal.